A lesson in culture 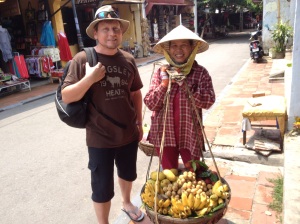 Arriving in Hanoi, Vietnam was an experience I’ll never forget. Driving from the airport to where we stayed we were greeted by a bustling city, scooters everywhere, smog, dilapidated and new houses, rice farms, people literally living on each street, narrow alleyways, propaganda billboards, and the smell of barbecued food. To say it is a sensory overload, is an understatement. Vietnam is rich with culture, history, art, cuisine, and an amazing people.

Visiting the war museum in Hanoi was one of the highlights for me. I knew little about the deep history Vietnam has and the many conflicts the nation has been involved in over the centuries, starting with the Chinese, the Japanese, the French, then the Americans. I am reasonably familiar with the American war as I grew up watching many Hollywood movies forming various opinions of the conflict, fearing the Vietcong  their horrifying booby traps, and their vicious prison camps. Apocalypse comes to mind instantly.

This is what I learned:

The U.S. entered the war to reach an objective. That objective was to stop communist expansion. The goal was not achieved, therefore, the U.S. lost the war. True, there were more casualties for the North, but that does not determine whether or not they lost, considering the superior technology and training of the U.S. forces. 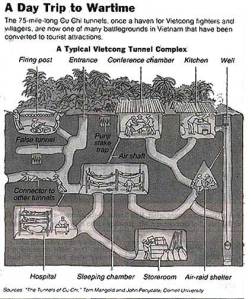 The Vietnamese won the war. The Vietcong defeated the Americans with only a limited amount of guns and artillery.

So how did they prevail?

The people we met in modern Vietnam were delightful. Happy, vibrant, optimistic. They are extremely proud of who they are. Yet compared to us Westerners they are small in stature, lean and almost frail people. Yet they prevailed. Remarkable.

Have you ever been involved in a discussion about organisational culture? What it is? How it influence people and their workplaces. It is not the easiest concept to quantify. Yet, it profoundly impacts on organisational performance.  Although most managers are aware of it, they find it hard to grasp let alone change it.

I was facilitating a leadership program recently and we were discussing corporate culture, when it dawned on me. This is it. It is The Tunnel Complex. Corporations consist of extensive and deep seated “tunnel systems”. The collective behaviours of people, norms, memories (that can stretch back decades), good and bad experiences, and legacies of previous leaders. These “tunnels” are complex webs interwoven, entrenched and ” buried” deeply below the organisation. The people “living” in these tunnels are usually long serving employees who know the system exceptionally well, they are typically on the lower end of the organisational chart, have seen successive managers come and go, they have experienced one management “fad” after the other imposed on them, they tend to be cynical of any new interventions or management initiatives, they are generally mistrustful of senior managers, they have seen mates being ill treated, perhaps themselves. They know they will prevail, eventually. History tells them so. It is these “tunnel” systems what makes culture so difficult to change. Therefore, an understanding of how they operate in organisations could lead to valuable insights and ultimately strategies on how to change them. This is the essence of what I refer to as The Tunnel Complex.

Do you know your organisations’ “tunnel” systems ? 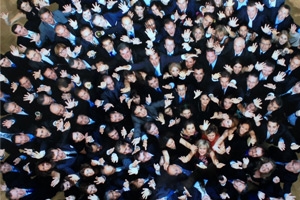 “It always comes down to the people”. 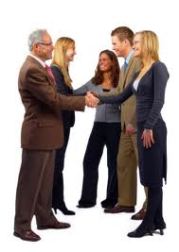 I am about to commence the writing of a leadership development program for a global engineering firm employing around 40,000 people. As part of their succession planning process, they have identified, what they call “Successors”. A group of highly talented managers with a proven track record of performance. This group of people are between three to five years away from being senior leaders in the business. Future stars. The aim of the program is to equip and prepare them for future senior leadership positions. This is an exciting opportunity for the participants as it will help them to further develop and enhance their leadership skills. I am also excited about this opportunity as I can develop this program (from “scratch”) to specifically address the individual and business needs. It is not some “of-the-shelf” customised training program that I am sometimes asked to deliver.

In the lead up to securing this piece of work, I had a number of meetings (as you do), with the managing director and human resources manager at their head office in Sydney. One of the first questions I usually ask my clients in these situations is, “what specific skills do you want the participants to develop?”. Sitting in the meeting room, my mind rushed with possible answers the client will give me after I asked this question. The participants are intelligent, experienced and tertiary qualified practicing managers. It is a broad question that can elicit many possible answers.

The managing director paused for a moment, looked at me, then he looked towards his human resources manager. Then he looked me straight in the eyes and said without hesitation, they need people and communication skills. He then explained to me why this is the case. ” The parts of our business where we have the most issues and problems are do to the leaders in these areas not possessing adequate people and communication skills”.

So here I am, writing a program for the future stars of this business, predominantly focusing on the, as it is erroneously referred to, the “soft skills”. This managing director “gets” it. No wonder I am excited. We are going to achieve things. Does your senior leadership team possess the necessary people skills?

“It always comes down to the people”

One of the advantages of being a management consultant working in the corporate sector, is that not a day goes by where new learnings are discovered. Real gems, practical skills, latest innovations, things you don’t necessarily learn from Uni or a text book. This blog is to share some of these learnings and to build a compelling story of effective leadership we can all benefit from.